SAPERE was born out of the experiences of Professor Jacques Puisais, a man of science. A chemist by training, director of the research and analysis laboratory in Tours, France, he built his educational project on scientific foundations from the beginning.

Today, SAPERE is particularly focused on research to understand more about the mechanisms behind food choices and rejection in children.

SAPERE’s science committee is led by Einar Rivsik and meets once a year.

Taste education has long been a topic of scientific interest, with approximately 3000 scientific articles focused on the question of children’s eating behaviours.

SAPERE has developed a tool to measure the method’s effectiveness, which has been applied in various European countries. According to a 2015 Finnish study: 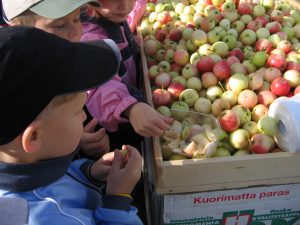 60% of children who had been through taste education classes tried unfamiliar foods,

compared to 35% of those who hadn’t had the classes.

Our organisation also focuses on measuring the effectiveness of different teacher training methods.

See below for research studies and articles about SAPERE: